Rings have been worn throughout history. The Egyptians loved them as well as the Greeks and Romans, and in the Middle Ages they attained the highest perfection of manufacture. A ring can simply be an ornament of decoration or a symbol with deep meaning.
My life journey can be mapped through a series of rings. The first ring of note would be my High School Class Ring from the era where girls and guys wore gaudy, clunky rings set with large stones. Mine had my school symbol and a mega phone for cheerleading engraved in it. I received it as a Freshman and wore it for 5 years. It defines my growing up years. The group of people - parents, teachers and friends - who influenced and shaped the person I would become.
When I retired my class ring I replaced it with a Promise Ring. Often a pearl is given to a girl with the promise that eventually she will marry the giver. My Promise Ring carried personal significance. My husband purchased it in Mali, Africa the summer before we met. It is made of gold, shaped in a "V" form. The filigree on the front is separated by 3 vertical bars of gold. The third bar is at a slant showing the rawness of African art where symmetry is not perfection. For him the ring signified a period of maturing, leaving home and becoming his own person. He set his eyes on God's desire for his life and knew that someday he would give this ring to a very special woman. Nine short months later he gave me the ring before parting for the summer. Although I wasn't ready for the commitment of engagement, I knew he was someone who would be in my life for a very long time. 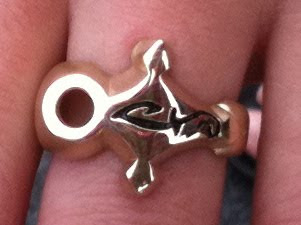 The next ring was the engagement ring. Many people have looked at my ring and suggested now that we aren't poor I should get a new diamond. What they don't know is my husband dropped out of undergraduate school to buy this diamond. The sacrifice he laid down for my heart is something that will never part from my left hand. Again, God had a plan and my husband entered the most prestigious Osteopathic school in the country without an undergraduate degree. One and a half years later I added my wedding ring to symbolize the union I now had with my husband.
Years would pass before the next ring. My husband lost his original wedding band while mountain bike riding. The nurses in his office would wrap twisties on his finger or tie on a piece of string to show he was married. We went through a few $50 cheap wedding bands, but were looking for a ring that represented our story. My husband found if for pennies while deployed to Afghanistan. It was a combination of 3 metals interlinked. Very unique, but representative of our bond even through separation. He wore that ring for several years before the links began coming loose and catching on things. Eventually it was retired to the jewelry box before it was lost or broken.
This past year we feel we have said goodbye to one period of life and walked into the next. My husband got the job with the SD, moved to D.C., experienced Flag Day, was sworn in, and began training. Part of his training included a week long class in Hawaii. I flew to meet him for a week before he left for his post. While there we found a wood and platinum ring. It was made for surfers so it would be something that would withstand the crazy things we seem to put our rings through. We weren't looking, but it was perfect. The trip and the ring represented a new page in our story. It would give my husband a visual reminder of my love for him through this next year of separation. We would always look at the ring and say "remember that trip to Hawaii where we got that ring?".
As the time approached for my husband to leave he mentioned that he wanted to get each of the kids a special gift. Something they could look at and remember their Dad. He began looking and mentioned a necklace for one of the girls. A friend designed a family seal for us not too long ago. Ideas began flying and soon I was at the jeweler having necklaces made for the girls and a ring for the boy. The design is a stylized Tuareg cross with our initial in it. The Tuaregs are a nomadic people who live in the Sahara Desert of North and West Africa. Just before we met my husband spent some time in Mali. He has worn a Tuareg cross necklace since I met him. A Tuareg man often gives this cross on a necklace to his child before leaving on a journey. One common meaning of the cross is "no matter where you go, God and I will always be with you to protect you". This simple design seemed to express more than we could with words. The personal journey for us from the time my husband visited the Sahara to receiving a job with the Foreign Service is represented in this cross. My husband gave our son this ring before his departure for Pakistan.
On one of my husband's last trips home he gave me a little box. Inside was a white gold ring inset with diamonds. He said when he saw this ring he thought of me. Now as I wear it on my finger I daily think of him. It is a symbol of our love and commitment throughout this year. A relationship takes work, especially when separated by thousands of miles. The ring is a reminder that the work is worth it because the person is worth it. I was in a coffee shop with a group of men my husband used to have coffee with. We began talking about rings. One man had a signet ring that was meaningful to him because of the event in life it represented. Stories began unfolding. Next time you see a unique ring, ask the person about it. You may be surprised at the story you hear.
Posted by Inner Beauty at 4:59 AM