Every boy wants a dog, and my boy is no different. Moving several times over the past few years just hasn't provided a good opportunity to get a dog. So we made the promise “when we get to our first post as a family you can get a dog.” The researching began. Damon spent hours looking at different dogs online. Reading about their characteristics, thinking of names. Last year on the day after Thanksgiving there was a dog bed that matched Damon's room for a seriously good price. We bought it and put it away for that big day when we would get a dog.
When we arrived in Bogota one of the first things we noticed was how many people had dogs. Dogs out playing in the park, dogs with joggers, dog walkers with 6-9 dogs. We were delighted that Bogota is such a dog friendly city.
But, we live in an apartment. It's not an easy “let the dog out the back door” sort of a place. We have to take an elevator up to our apartment. This was rather a nerve racking thought to me because you know whose responsibility the dog will be when Damon is at school! Our first week here some new friends said they were taking their French Bulldog over to the kennel while they were out of town. I thought about if for one night and said “Do you mind if we watch the dog? Sort of a trial run for us to see if the dog thing works.”.

So Luna the Bulldog came to stay with us. Luna has a character of her own. She can play catch in the park for over an hour, sprinting after the ball with so much energy it makes you giggle. She had a little cockiness to her as well. She learned that if the ball went in the river Damon would have to go down and wade through the water trying to catch up with the ball, so on occasion she would chase the ball, look at Damon, drop the ball down the bank then look at him again with her tail wagging. Luna had a gas issue as well. Sometimes we would be sitting there and this awful smell would appear. We would gag and run out of the room. But oddly enough we really liked Luna. She had wormed her way into our hearts. 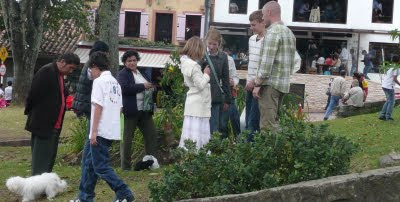 So the search for a dog of our own began. We had a dog trainer come over. We told him the qualities we were looking for. We talked to people in the park with dogs. Then we began shopping. The most important quality to us was health. Apparently there is a lot of inbreeding going on here producing dogs with many health problems. A lack of proper vaccinations at an early age is another problem. We put the word out. I called a few vets I had heard of, the trainer was looking, we went down to Usican to look for people selling puppies. We found a cute Dalmatian puppy, a Chocolate Lab and the little Shitzu I tried talking my son into. But none were on our list of what we wanted. 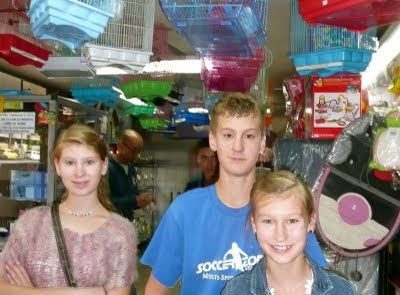 I contacted the Pet Shop down the street. They put the word out and soon called me back with a Husky puppy to see. We were all excited. I was positive this was going to be our baby. A friend took the kids and I down to “pet street”. It's an area where there are a couple blocks with pet shop after pet shop. Unhealthy animals, but cheap prices on all the necessities for having a dog. We bought the crate and three beds, a dog house and bowls. As we were walking back to the car with our new dog stuff, my phone rang. It was the Pet Shop and they said the dog had arrived but was not in good health. They could not sell it to us. And just like that all the anticipation fizzled out of me. No dog but a lot of dog goods. We continued to wait patiently. I kept calling the various contacts I had until finally a Belgian Shepherd was found. The owner came over. There was no decision. It was assumed the first dog to make it into our house would be ours. This dog wasn't on our list, but he has made a place in our home.
Posted by Inner Beauty at 2:03 AM