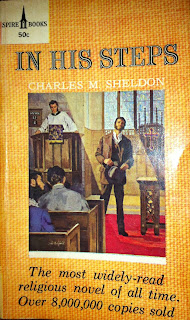 In His Steps
By Charles M. Sheldon

I remember when the phrase “WWJD” became very popular in the 1990's. I saw so many young people sporting the colored rubber bracelets. I heard radio announcers end every conversation by asking “What would Jesus do?”. It was clearly the catch-phrase of the day. The situations it was used for were typically moral responses to various dilemmas. How could we best discern how to live our daily lives as God would ask us to? Quiet frankly I got tired of the phrase rather quickly because I never saw any change in the behavior of the Christian community. I had no idea the phrase had much deeper roots than the pop-culture of the '90's.

Before vacation I scoured the books I had brought looking for a good read. This past spring my parents cleaned off their shelves sending me off with lots of reading material. I choose yellow paged book called “In His Steps”. First published in 1897, Charles Sheldon wrote this book to be read aloud to his congregation. A former social worker who disguised himself as an unemployed printer, he tramped around the streets of Topeka, KA. He was shocked at the indifference to society the Christian community had.

The book follows the story of a pastor who through a circumstance confronts his congregation and challenges them to devote one year of their lives to asking the question “What would Jesus do?” before making any sort of daily decisions. Following a set of characters the book examines the changes made in individual lives, the church, the city and ultimately the nation. Although the focus of the book is to examine how we treat the poor among us, many characters had to make decisions in their lives based purely on right and wrong. Often the decisions went against the social norm and consequences were felt in their lives.