A Beautiful Day - For a Bomb 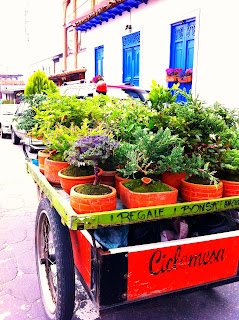 It’s been an unusually beautiful day here weather-wise.  Puffy white clouds float along in the brilliantly blue sky.
I had a morning appointment at the embassy.  My normal traffic frustrations went to the back of my mind as I drove along the wall of the embassy.  A wall with probably 100 Colombian swat team members walking with crowd shields.  Unusual.
I passed through the check-points.  My car was inspected.  I noticed the flag at half-staff.  I found out this was because today is a new policeman memorial day.  But the flag at half-staff just added to the weird vibes I was getting about the day.
Appointment done, groceries bought and check cashed, I was just going to say “good-bye” to THE DOC when I noticed confusion on the tv in the waiting room.  The nurses were solemnly standing behind the desk staring at the screen.  A bomb had gone off about one mile from my apartment.  Three dead, seventeen injured.
When that sort of thing happens you feel a heaviness inside.  Your head screams “Why would anyone do that?”.
Today is the first day of the free-trade agreement with America.  A motorcyclist targeted a former government Minister, tossed a bomb and missed hitting a bus full of people.  The Minister was taken to the hospital.  His body-guard and driver are dead.  Innocent people on the bus are dead.
The Doc. and I sat down for lunch outside.  We tried to chat about normal things.  We heard popping noises, shots or something.  I don’t know what was going on out there, but there are riots at the college campus down the street were going on.
You think about your kids.  I have a plan in my mind of who to call if another bomb goes off.  The kids can stay north, they are safer there.
It’s a great city, and today the sun is still shining out my window, but this is the reason it is considered a danger post.
Posted by Inner Beauty at 3:30 AM