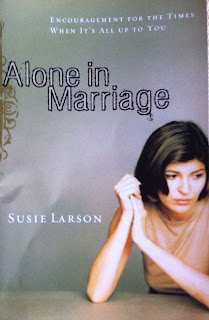 Alone in Marriage
by Susie Larson

This is not a book I would have typically picked up at this point in my life to read - maybe a few years ago, but not now that we are back together as a family again.
But, taking the time to sit and read has really helped me process some of the "Alone" times as my man was deployed and working overseas.  Not being in the aloneness anymore helps me to reflect on how that time impacted me, made me who I am today, and what I need to process and change.
In my marriage I have tried to pick-up the slack wherever I could to help my husband get through medical school, internship, residency, job changes, 2 deployments then finally beginning to work for the State Dept. which included 6 months training in Washington and a year in Pakistan.  We are a team.  "I am here to help him in any way possible" has always been my attitude.
For years I took care of the house, the yard, the kids, the bills, the cars - happily.  My man had his responsibilities to care for and I helped out wherever possible to free up his time.  But then something changed in my attitude that last year alone.
Susie says "When the wight shifts in marriage, almost always a sense of injustice follows." When I read that sentence, I felt like I had been punched in the gut.  That was exactly the shift that had happened in my spirit.  I was tired and worn-out.  Fixing the house, living where I didn't want to be, selling the house, packing up the house, running three kids in three separate directions at the same time.  I was worn out and injustice set in.  My life changed to a means of survival rather than thriving where God had placed me.  My focus was on exhaustion and trying to hold it all together rather than looking to the strength God was providing.
It then hit me that I did the same thing to my husband when we got here to Bogota.  In not so nice terms I said "I will never mow a lawn again; I will never change the oil in the car again..."  I thrust all that I had been carrying on him without sitting and discussing how I was feeling.  I think he must have had a feeling of injustice at that point as well.
In a note written in the book a woman said "I knew God was saying the man I married years before had died and with him went my commitment."  The husband had cancer and the strong medications had altered who he was.  My husband hasn't radically changed, but I realized that 18 months apart is enough time for experiences to change a person.  We worked very hard to stay connected during that time.  We skyped regularly, wrote letters and emails and took every advantage to see one another when an opportunity came up.  I even visited Pakistan which helped me understand the world he was living in.  These things helped tremendously.  If we hadn't made this sort of effort, I can't imagine the disconnect we would be going through.
But even with all the effort there is a disconnect.  I see it with my daughter right now.  A friend is visiting from home.  They have been having a blast together but last night her friend wanted a bit of alone time and my daughter couldn't understand.  Their lives have been different for a year without much interaction to hold them together.  Chicklet has had to adjust to little outdoors time while living in an apartment and a lack of soccer training which has been a sacrifice on her part.  Her friend is devoted to soccer and has the opportunity to really push herself.  She spends a lot of time outdoors in a very safe environment.  These things are pulling them in two different directions, but they have some awesome things that will hold them together for life as good friends.  They both travel and experience 3rd world cultures which none of their common friends can identify with.  They click and know how to laugh and have fun together.  And they love the same God and have made that a priority in how they choose to live their lives.
So just as with my daughter, me and my man are finding our common ground together and taking these separate experiences and winding them together into a new, beautiful third way of doing life - together.