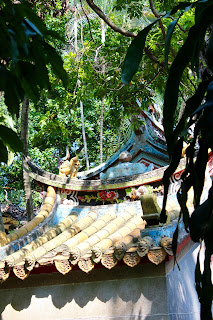 Tonight I am going to Bible study in a strange country with women I don't know--yet.  I'm excited about this new group.  They will teach me things about looking at the Bible through their culture.  They've grown up in an environment very different than where I grew-up, in middle class America.  Many of these women were raised to worship idols.  When when we talk about "Thou shalt have no other gods before me," I will see this through the hard reality of the battle these women face with their families.  For me to talk about struggling with the "idol" of facebook is so different than the excommunication from their family because they no longer light incense and bring offerings to the golden Buddha on the corner.

My mind wanders back to my first experience of a Bible study in a foreign culture.  We took our three, very small, kids on a short term mission trip to Africa.  I had communicated to our host missionary's wife that I wanted to be involved in some way as well.  She  felt the good doctor's wife should lead a Bible study of the local house-help women.  The women were wanting one and I would be a great way to get it organized and off the ground.  My pastor's wife helped me select a study.  I packed enough books in my suitcase and nervously awaited our first meeting.  I was so young, but the belief that one missionary had in me ignited a passion to help women study the Bible.  I led that group of eager women through an interpreter, so our meetings stretched out and a lot of conversation went back and forth without me knowing what was going on.  As I began to wander the village and talk to some local people who spoke English, I got a deeper understanding for the animism that saturated their belief system.  Spirits were real--even the Christians had seen the taller than a telephone pole, skinny spirit people from time to time.  They feared them and stayed away from pagan rituals.  They had witch doctors who lived next door.  We were studying the book of 1 Samuel.  When we came to the passage where Saul consults a witch (1Sam. 288:7), I stopped and asked them about this.  What did they think about this passage?  How real was it to them?  The women looked at me with intense eyes. They told stories of family members who consulted the witch doctors.  Tears fell down women's cheeks as they remembered loved ones who died because their blood was drained by the witch doctor to heal them.

This was my first glimpse of the long ago stories of the Old Testament being a reality to those alive today.  The Bible becomes richer when we take the time to listen to others who live as Christians in places where they are persecuted or where animism or idol worship is a real thing.

It's hard to experience this on a comfy couch, with soft carpet under my toes.  I take a step when a woman from another country joins my group and I can learn from her.  But when I pass a temple, with my Bible tucked under my arm, then sit with a group of women who day after day stand as a single light in the darkness, God strips me down to the raw.  He lets me see through the eyes of others.  It is an honor to stand with these women.  To laugh with them and to cry with them.  I pray that I encourage them as they encourage me.
Posted by Inner Beauty at 6:24 PM