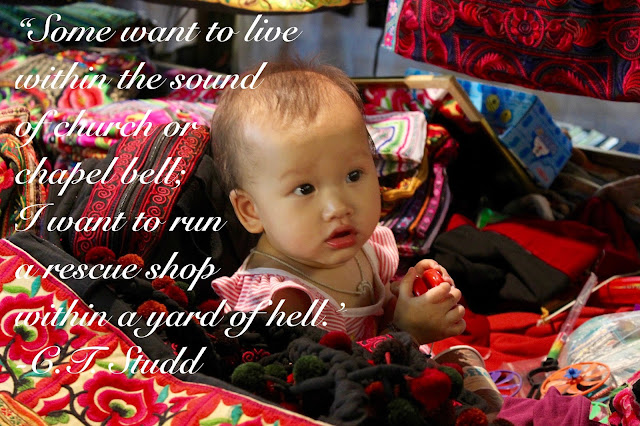 We said "goodbye" to Bangkok and headed north to Chiang Mai.  The first 2/3's of our trip was busy. We were very focused on all the teaching, outreaches, ministries and safe house visits.  I was ready to leave the city and clear my head a bit.  Chiang Mai was a much more relaxed pace for our group.  Here we were able to visit night shopping markets, eat street food and soak in the culture.  We visited a temple as a group where we got down on our knees and prayed for the city.  We rode elephants, watched women make traditional umbrellas and saw each step in the process of unwinding a silk worm cocoon through weaving the silk into fabric.

We laughed, we talked, and slowly we began to process the past week in Bangkok - together, as a team.

But our trip was not yet over.  We had one last safe house to visit.
Chiang Mai is located near the mountains where tribes of people live between the boarders of Burma and Laos.  It was a city where we were free to wander the night markets without being confronted with sex at every turn.  But don't be deceived, the sex trade is alive and thriving here.  Chiang Mai is the first stop on the way to Bangkok for the girls taken from the rural areas.
The safe house we visited was different in several ways from the ones we visited in Bangkok.  Here there was land to build a compound with four dormitories and a multipurpose hall with dining room.  A pond in the center, with some large trees for shade gave the establishment a feeling of peace and retreat.
This safe house began as an orphanage when a retired US Postal Service employee came to Thailand with the heart to help abandoned children.  As with all the ministries we visited, one need exposed another need and another.  The director began to discover that families were being deceived as sex workers came to their towns offering good jobs for their daughters as florists or in other trades.  Her team now makes regular trips to the small villages in the mountains, trying to tell the families the truth and convince them to allow their daughters to come live at the orphanage and receive an education during the year, then return to work the family rice fields in the summer.  Most families do not believe this is what is happening to their daughters.  They only see the money coming in the mail and the nice things their neighbors buy.  This would be considered preventative work.  Providing alternative opportunities for children so they don't enter into the sex industry.
This was the only place we saw boys as well.  When I think of sex slavery, I don't really consider boys to be victims, but they are a growing concern as the homosexual population grows.  Young boys are bought to work in the gay red light districts.  About 10 boys were there, who had been rescued from exactly that situation.
We had a little more time in Chiang Mai, so a team had prepared games and crafts for the kids.  I joined in with the games and had a lot of fun running around with the boys, trying to pop their balloons.  Maybe it was because a specific 17 year old boy reminded me of my son only a few short years ago.  This boy was tall and lanky, loved soccer and had a happy, easy going personality.
The kids in the safe house put on a program for us where they did a few skits and we sang together.  Our director spoke and asked the girl on our team, who had been a victim herself, to dance.  A song of God's love and redemption began.  She leapt and twirled, throwing all her energy and emotions of the past week into this one moment.  The tears began slipping down the cheeks of the older kids.  An invisible bond had been created, one that said

My friend was no longer able to continue dancing.  She went to our leader and crumbled in her arms. I walked on holy ground that day as I witnessed colors and languages vanish while these children who had been rescued from the sex industry and into the arms of God, wept together.