TIP - What it is and Why it's Important 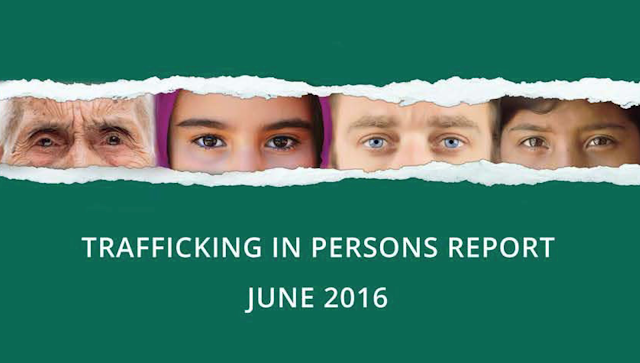 Each year a new report is written.  A team of around 15 researchers visit each country.  They collect newspaper articles, look at police reports and talk to NGO's working in the country to learn what the real situation is.  The 2016 report just came out a few weeks ago.  418 pages of information on individual countries and how they are rated.  There are basically 4 levels of ranking.  Tier 1 is the countries that obtain the minimum standard set by Congress and Tier 3 is countries that do not meet the minimum standard and are making no effort to do so.  Snuggled in between Tier 2 & Tier 3 is the Tier 2 Watchlist.  These are countries that are trying to meet the minimum standards.   They are slowly improving or there may have been some decline in their success.  The report is looking for specific action in the areas of Prosecution, Protection and Prevention.

So that is the "What it is" bit, but why is this report important?  (Other than being interesting to flip through.)

Ambassador Susan Coppedge and a few people from her team visited Taiwan this week.  I was able to sit in on a few meetings and began to get a glimpse of the legal side of the human trafficking issue. This report is used as a tool, in talking with other governments, to asses how they are responding to the issue of trafficking within their boarders and with their citizens.  It gives a format where a lot of research has been conducted and printed for the world to see and lays a foundation for conversation to begin.  Tension can be formed between the US and another country when it is downgraded a tier in their response and success with confronting human trafficking, but the ultimate goal is to create greater cooperation between governments in this battle.

I've looked through this report before.  I'm interested in the places I've lived.  How do they rank?  How does my perception from living there fit with the finding in this report?

The United States has a Tier 1 ranking.  Although I have been surprised to learn how real human trafficking is in the America, the government, including police, case workers, prosecutors, judges and the federal government, are actively working to enforce laws that help the victim and bring a sentence to the perpetrator.  This even has filtered down to our citizens.  Just the other day I read an article about the organization Truckers Against Trafficking.  These truckers are trained to look for signs at truck stops, restaurants, hotels and on the road for people who are being held against their will.  How cool is that?

Colombia has a Tier 1 ranking.  This surprised me.  I guess because of their problems with drugs and the FARC and government corruption, I assumed that human trafficking would be an issue that was difficult to control.  Instead, the government is taking action to investigate and prosecute perpetrators.  They added 14 prosecutors to handle cases specifically related to trafficking.  You impress me Colombia!

New Zealand has a Tier 1 ranking.  This is not surprising.  New Zealand is a first world country with a law and government that are functional.    They are active in the fight against human trafficking, recognizing that trafficking takes place not only on land but on water as well.  Fishing boats are becoming known as places where forced labor is taking place.  New laws went into effect this year requiring fishing vessels to obtain licenses to fish in their waters.

Russia has a Tier 3 ranking.  The TIP report is drenched with the name "Russia" with people being trafficked from, through and to this country.  Am I surprised?  Yes and no.  I feel like I lived there and I didn't see it going on around me.  Things look good there.  Crime isn't rampant - unless you're talking about the government.  Or could I see it and just didn't fully comprehend what was going on? Forced labor is the main trafficking issues in Russia.  Foreigners from poor countries, especially in Africa, are promised jobs, are paid by a recruiter to come to Russia, then when they step off the plane, their passport is taken and they have no way to return home.  An interesting thing about Russia is that you can't leave whenever you want. You have to have an exit visa.  Of course without a passport, you can't get an exit visa.  Besides, these people just gave all the money they and their extended family had, just to get to Russia to have the job they were promised so that they could support their greater family back home.  Some people are then kept in slavery until they can repay their debt (in other words never) and others are just abandon with no place to live, no job and no identification.  I worked with an organization in Moscow that helped these illegal immigrants.

I challenge you to take a look through the TIP.  Pick a few countries to look at.  Where did your family come from?  What about Brazil where the Olympic are being held this summer?  What countries are on your bucket list?  Find a few and see how they compare.