With Love to Carbon 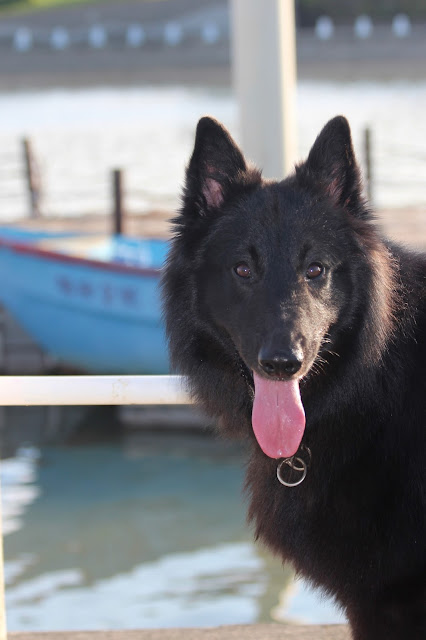 After three weeks back in the states, I was ready to be home.  A 45 minute delay on my last connection made me that much more exhausted as I dragged my suitcases off the luggage belt and onto a cart.  I wondered if anyone would be at the airport to get me or if I would be taking a taxi home.  We never talked about it and it was a work night and school night, and it was late.

I was so happy when I walked into the lobby to see my husband and daughter there for me.  I walked straight into their arms and we held on tightly.  Then with a shaky voice, my husband told me that our dog, Carbon, had been hit by a car earlier in the evening and died.  Suddenly, time stood still.  Numbness took over as we stood in the airport, the three of us clinging to one another, softly crying.  We continued to cling during the drive home.

Carbon joined our family 5 years ago.  Our son wanted a dog as all boys do.  We were now living in an apartment and the commitment of having a dog was very different than when we lived in the states and could simply let the dog out to play.  We borrowed a dog and did a trial run to see how he would handle the responsibility.  Soon we were looking for a dog of our own.

Carbon and Damon become buddies.  Sometimes I would find Damon asleep on the floor snuggled up to his dog.  I've heard it said that owners look like their dogs.  In some ways this would be true for Damon and Carbon - both are tall and lanky.  But it went deeper than just looks.  I often laughed at how much their personalities matched.  Both are carefree, happy creatures.  All Carbon wanted to do was play fetch.  He could run himself into a stupor until he was staggering around and banging into walls.  All he cared about was fetching a ball or stick over and over again.  He had little concentration on hikes unless we put a stick in his mouth.  It gave him comfort that there was a game just around the next bend.  Both these boys are also social.  We couldn't have company over without Carbon slipping his nose under someones hand until they were scratching his ears.  Most the times guests didn't even realize they were doing it.  He just had a way of worming himself into your heart.

Then our boy went to college and lived in the dorms.  Carbon was simply too much of a dog to slip in unnoticed, so he continued to live with us, moving country to country.

Friends know that pets are not my thing.  They are messy, need time and attention and destroy things.  It's the simple reality of having a pet of any sort.  Even fish need to be fed.  I determined that I wasn't going to get attached to this dog.  It had taken me time to love our last little bundle of fluff, but when I fell, I fell hard adoring her.  Our relationship had a devastating end that has taken me years to get over.  I didn't want to go through that loss again.

But slowly, Carbon found a place in my heart.  Apparently a much larger part of my heart was reserved for him than I realized.  It began a few years ago when he would follow me around the house bumping me in the butt with his nose.  All he wanted was for me to sit on the floor and love on him.  Sometimes just a quick scratch around the ears would do it and other times I would talk to him while running my hands through his fur.  I never let on to anyone that I was falling in love with this dog.

My husband pulled into the vet on the way home.  She took me back to where Carbon was laid on a table.  I dug my fingers into his thick fur and laid my head on his chest.  Tears poured down my cheeks as I said goodbye.

The nights have been hard.  Jet lag, hormones and loss are a cocktail for deep mourning.  When I begin tossing and turning I head out to the couch hoping to get a few more hours of rest.  But my hand drops off the edge, and the warm fur and softly breathing body isn't there to bring me comfort.  The house is too quiet.  There's no slobber on the floor to complain about.  I have no excuses to take a walk by the river and get out of the apartment.  The cat has no one to fight with.  Simply put, his presence is gone.  I walk in a door and expect to see him - he's always been waiting - but it's empty.  My heart is lonely.  I loved this dog so much - we all did.  So no matter what I say about pets, know that I love them in my own deep way and saying goodbye to them is oh, so hard.