Another Day in My Life 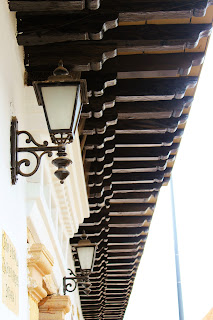 The flu has been going around the school, the embassy and probably Bogota in general.  Three of us down, two to go.  The phone rang and number four said they weren't feeling well, could I pick them up from school?
I knew this was no phony sickness so I picked up that pale and rather ill looking child and headed home.
"Roll down the window if you need to throw up."
A few moments later I was eternally grateful for that great motherly wisdom that had passed my lips as we were speeding (as fast as one can with busses, motorcycles, taxis and potholes) down the autopista headed home.
The window rolled down.  A head hung out plastering puke on the side of the car.  Bogota does not have shoulders to pull over onto so we just continued driving with the traffic.
We pulled up in front of the apartment and I did the unthinkable.  I left the car parked outside.  With shoulders back and head held high I assisted my sick, vomit soaked child up the steps, past a few people outside, the portero and the maid and into the elevator.  This portero is particularly bubbly, rattling off long, complicated sentences none of which I ever understand.  He was speechless.
I changed into sweats and an old t-shirt, filled a bucket with soapy water and did the next unthinkable thing for the Chico neighborhood.  I went outside and washed my car.  The poor portero came running with another bucket of fresh water.  Yes, this was not a one bucket job.
Women strutted past in their tight pants, leather jackets, manicured nails and high heels giving me the death stare.  The portero huddled inside.  I smiled and greeted each one as I continued to wash the vomit from the car.  Satisfied with my job I dumped the water and pulled the now clean car into the garage.
Only then did I look down to see that I had managed to lean into the vomit on the car and was now wearing it all over my front.  Well, if I'm going to break the rules of this neighborhood I may as well go out in style!