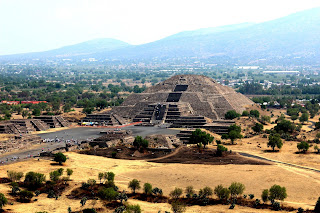 One of the cool things about being a part of the foreign service is the connections that are made with people all over the world. When traveling to a city my first thought is "Who do I know that lives here and would like to grab dinner or a cup of coffee?"  It's expected. I know I would be very disappointed to find out that someone I had met along the way was visiting Bogota and I didn't have the opportunity to show them the city. We all live in these sort of odd, out of the way places so company is a welcome joy amidst the daily grind.
One of my husband's friends from FSI is living in Mexico City. I met them only once because I was doing the commute from Michigan thing.  It's always been a bummer to me that I missed out on that time in DC making friends, learning the ropes and starting this life together rather than joining in later, but that's what spouses do. They do whatever it takes to keep the family moving in a positive direction during change.  They provide stability and support which often means putting the kids’ needs first.
So I sent an email and she offered to take me to the pyramids around the city.  I actually had no idea what she was talking about but thought it sounded good.  We clicked from the first moment and spent a beautiful day together wandering the ruins and getting to know one another better.  I admire her for the volunteer work she is doing at the Red Cross hospital and how she's worked hard to learn Spanish.  She's settled in and made a home. They've found their grove there in Mexico.
I was astonished by the pyramids.  I had no idea that something that ancient and large was there. We enjoyed a fabulous Mexican lunch in a cave. I learned that Tex-Mex food is really what I love and probably the American version of that!
We relaxed a bit at her place before her husband joined us for dinner.  They took me to a delightful little crepe place with a great atmosphere. To be honest, I was exhausted by this time. The week had been amazing.  I was pleased with all I saw and experienced.
I am so happy that I got to spend this day with a friend. I got to hear what they love about the city and country. It put to ease many fears my mind has created from the news.  Maybe someday I will want to return to the Americas and would consider this to be a good city to spend a few years in.

La Gruta
In san Juan Teotihuacan
A cave just around the corner from the pyramids that has been converted into a Mexican restaurant.

Email ThisBlogThis!Share to TwitterShare to FacebookShare to Pinterest
Labels: Travel