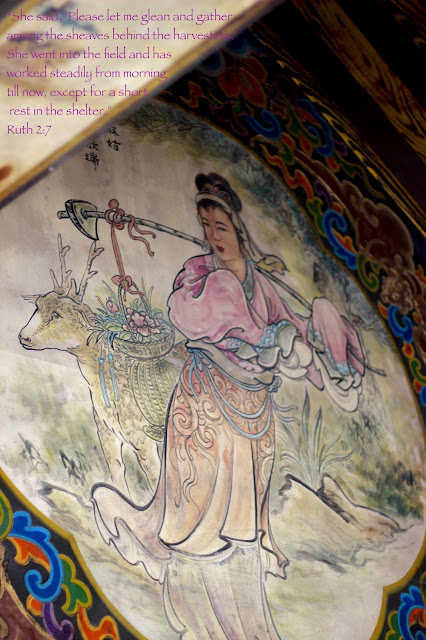 Like every little girl, I would imagine that Ruth played dress-up or put together imaginary stories in her mind of what life would be like someday.  While she was running around with the other little girls in Moab, I'm sure that she never played the part of the poor widow in a foreign country who followed along behind the servants, picking up the bits of looked-over grain so that she could eat a meal that day.

Ruth's dreams had been broken, but I never see Ruth wallow.  I know I like to wallow.  When things don't go my way, I take a bit of time to sit in the middle of my mud puddle and shed a few tears--especially when I am far away from home and feeling very alone in a foreign land.  But despite her circumstances, Ruth worked hard and quickly built a reputation of someone who was worthy.

Let's face it, life is hard.  There are times of joy and rest, but the majority of life is hard work.  It's all those times between the fun that really show who we are.  It's the everyday mundane that people see. They see our faces, listen to our words and watch our actions.  Day in and day out, we are building a reputation for ourselves.  Then in the mundane a crisis will happen.  There are always crises, big ones and little ones.  In the midst of crises, we find out what we are really made of.

Ruth was made of gold.  She had made a verbal commitment to her mother-in-law to follow her and follow her God and now Ruth is going beyond that promise and not just following, but providing.  God saw Ruth and blessed her.  That day, Boaz noticed Ruth and provided a safe place to work and a bonus of extra grain.
Posted by Inner Beauty at 8:31 AM