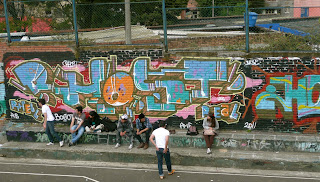 Driving in Bogota is becoming an experience too great for words. But try I must.
This morning the school called and said “Maddie is sick. Can you come get her?” Not a problem – I have a car. No more hassle, no more frustration. I was driving along quiet nicely. Traffic was bearable. About a mile from the school I was boxed in by several trucks. Suddenly a pot-hole or should I say “abyss” appeared in front of me. With lightning fast reaction I swerved not hitting any of the trucks around me but I still managed to clip the side of the pot-hole. “Clunk” “Ding” - warning light. Everything felt the same so I finished my last mile to the school.
As I slowly drove past the school looking for a place to park, several men ran out into the street and started waving their hands and pointing at my car. My heart sunk. I knew they were not happily greeting me and commenting on my beautiful car. Nope, I had blown the tire.
Fortunately, one of the men was Nestor who is a driver for many of us embassy folks. A friend was at the school for a meeting and he had driven her there. The men pulled out the spare tire, the jack and tire iron thingy. While they began working on the tire, I went in to get Maddie. We came out and there they were, standing around my car discussing and talking, but not working. The lug nuts were stripped. Thank you Discount Tire. We stood there in silence. My friend got done with her meeting and took Maddie home for me. Men walked by on the street. They stopped. Long discussions began. (Please don't forget that this is going on in Spanish around me!) Men continued to come and go. Much pointing and the one word I could understand “importacion”. Yes, my car is a Dodge and they don't have many of those around here. Then men began arriving with various tools. I don't know where they were coming from, they just appeared to be walking down the street with tools in their hands to fix problems. Fortunately one man's tools did just the job to fix my problem.
With spare tire on I very cautiously drove home. Despite the craziness of the flat tire I am thankful that Nestor was there to help me out and that my friend could get Maddie home for me.
Posted by Inner Beauty at 3:00 AM