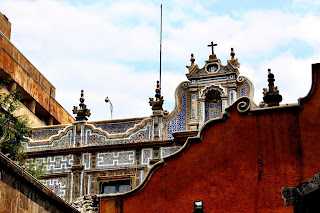 The purpose for my visit to Mexico City hinged on one event.  My daughter had been selected by her school to participate in a Latin American orchestra.  For months she had been practicing her pieces, bringing me questions about measures that I and even her teacher didn't know the interpretation of.  She worked hard on those pieces.
We dropped her off at the airport sending her with a friend - two girls unaccompanied - into the heart of Mexico.  Over the next few days brief texts and one quick skype conversation proved she was having a wonderful time.  She bonded quickly with her host sister and I thanked God that he had placed her in the perfect home.
I sat with another couple in the concert hall.  The conductor of one of the Mexico City orchestras came on stage and picked up his baton.  Instruments raised, a deep breath was taken and months of hard work floated in the air in beautiful harmony.  The applause was that of proud parents and teachers.  The collection of songs included 2 well know classics, a Mexican traditional song and a piece written by twin brothers from one of the schools.  The ending applause was endless, pulling the conductor out for an encoure.  A bit unprepared for that reaction he had the group re-perform a piece.  We were delighted and would have been happy to have the entire repertoire played again.
I was so proud of my daughter.  She embraced the experience and grew in many ways as a musician, performer and person.
Posted by Inner Beauty at 1:53 AM