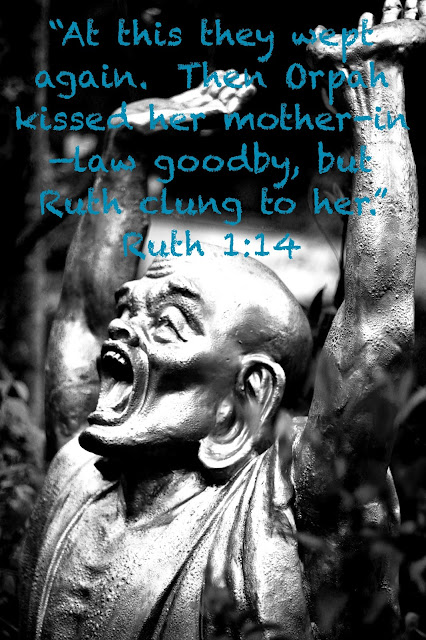 Weeping and Clinging - Tears of Goodbye.

There are too many of those in the expat's life, and I tend to avoid a goodbye if I can.  It's painful, I hate seeing an end, but it's not healthy for me to stuff my feelings and avoid that final word.

Many tears were spent in the departure process for Naomi, Orpah and Ruth.  They wept and wailed, then they did it again.  Over the years they had grown close.  They lived life together as expats often do.  Thrown together because of circumstances and commonalities, we learn how to develop meaningful relationships quickly.  We live our lives with our hearts and hands open and exposed so that we can share each moment to the greatest potential, then suddenly, it's over and we are moving on or they are moving on.  It hurts.  Our hearts are torn open and we are left feeling exposed and empty.

I don't like feeling empty.  I don't like bumping into someone I've already bid adieu.  It's awkward and then I have to revisit those feelings of emptiness that I had already placed in  a special corner of my heart.  I don't like to cry because I'm afraid that once I get started, I'm never going to stop.

These three women knew how to put their feelings on the table and not shy away from them.  They let their tears express the deep love they had for one another.  Tears of sorrow.  Tears of forgiveness.  Tears of permission.  Tears of goodbye.