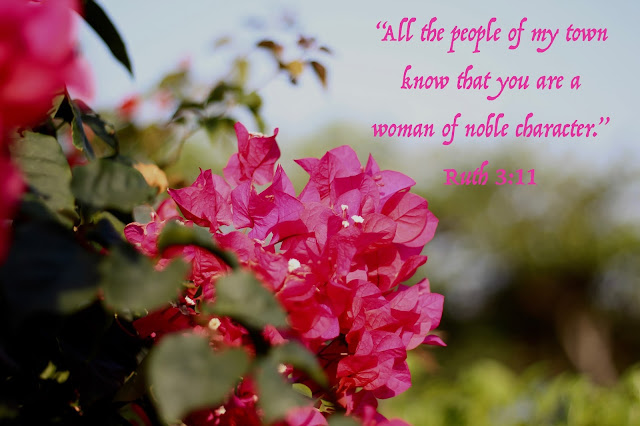 "All the people of my town
know that you are a
woman of noble character."
Ruth 3:11

What a beautiful reputation to have!  Can you imagine people who have come in contact with you saying you have "noble character"?  (Or as the King James version puts it, "a woman of virtue.") As I travel the world and come in contact with all these people who have predetermined ideas based on the media and Hollywood of what an American is, do I change their minds?  What about people who have preconceived ideas of what a Christian is?  Do they think "noble character" when they get to know me?  This is another one of those awesome little discoveries in the book of Ruth.

I can imagine the prophet, Samuel, writing the account of Ruth.  Possibly he sat down with Jesse, the father of King David, and listened to him tell stories of his grandmother.  Jesse probably reminisced about the grandmother he knew and the family story that had been passed down about how his grandmother came to Israel and how she met his grandfather, Boaz.  Samuel probably found this story fun and inspiring to record.  As he listened to Jesse, the phrase "a woman of noble character" could have run through his mind until he chose those words to write down as an everlasting description of this foreign woman who would become the great grandmother of King David and mentioned in the genealogy of Jesus.

The only other place in the Old Testament that we find this phrase is in Proverbs 31.  Yes!  The chapter we all turn to when we want to have a bit of guidance on the sort of women we are to be, the "Woman of Virtue" chapter.  The book of Proverbs was written by the wise King Solomon.  (I know that chapter 31 begins by saying this is from King Lemuel, but in my research, many scholars strongly feel that this is a reference to Solomon.  Another possibility is that Solomon is writing once again here because vrs. 10 is the beginning of acrostic poem.  So, I am going to assume that Solomon is the author of this section on the virtuous woman.)  Ruth was Solomon's great, great grandmother.  This is so exciting, it just gives me chills!  By using this phrase that would have been familiar to the people, it's as if Solomon is saying, "You want to know what a virtuous woman is like?  Look at my great, great grandmother, Ruth."  As I read through Proverbs 31, I see glimpses of the girl Ruth, who earned a solid reputation in such a short time in Israel.  She brings him good, not harm,  (vrs. 12) works with eager hands.  (vrs. 13) she gets up while it is still dark; she provides food for her family (vrs. 15) She sets about her work vigorously; (vrs. 17) She opens her arms to the poor and extends her hands to the needy. (vrs. 20) Her husband is respected at the city gate, (vrs. 23) She is clothed with strength and dignity; she can laugh at the days to come. (vrs. 25)  All of these phrases remind me of the girl Ruth, I have studied.  And then my favorite part.


Charm is deceptive,
and beauty is fleeting:
but a woman who fears the LORD is to be praised.
Proverbs 31:30

Ruth, the girl from Moab, who turned to her mother-in-law and said, your God will be my God, left all of her former religion behind, and with her whole heart, embraced the one true God.  She passed the truths of who God is down to her children, and they to their children until a king, sitting on the throne, picks up a pen and begins to write about his great, great grandmother and says "This is what you want to be like."  As she grew into a woman, these characteristics grew and matured into being a solid woman of virtue.


Her children arise and call her blessed;
her husband also,
and he praises her:
Many women do noble things,
but you surpass them all.
Proverbs 31:28-29
Posted by Inner Beauty at 10:10 PM