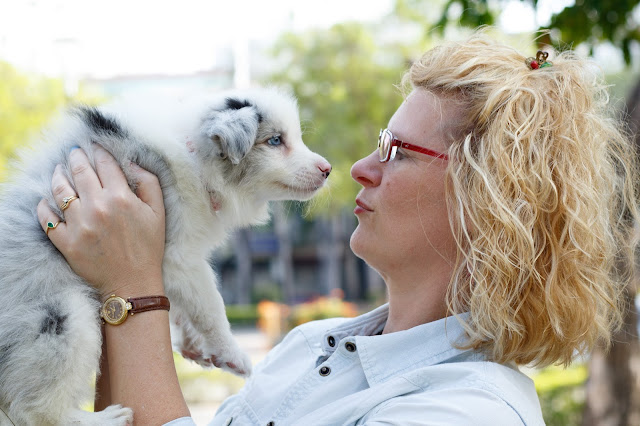 The house has taken on a rather flat, silent routine.  We work and go to school during the day and at night my daughter studies, the doc reads and I tidy up.  It's a comforting routine, but lacking the spark that Carbon brought to our home.

Because I'm the one who's not keen on animals, I broke the ice and commented that maybe we should get a dog again.  Within a matter of hours, research had been done and the search had begun.  With a little (or a lot) of help from the nurses, litters of puppies were found down in Kaohsiung.  The timing was right, it was the beginning of the Chinese New Year holiday, so we had a bit of extra time to devote to the dog search and find.

We decided on a Border Collie.  Not too big, but big enough to run with us and hopefully be a bit of a deterrent as we wander around foreign cities that become our home.  Because this breeder had litters to choose from, born every four weeks, we knew it was going to be more of a puppy mill.  I've always wondered exactly what a puppy mill is.  People talk about them with such distaste.  Now I know.

We took the MRT to the end of the line then got in a taxi to a medium sized property in a remote neighborhood.  The driver stopped and asked several neighbors where the house was.  I never understand what's going on in these conversations.  Isn't it rather simple?  "Where's the house that has all the dogs?"  Yet we drove back and forth between a stretch of about five houses, with long conversations along the way.  We finally arrived at the correct house - the one with all the empty dog cages in the driveway - duh.

I felt at ease because there was no dog stench in the air and I couldn't hear any dogs.  Then the owner walked through the door and a secluded courtyard where the adult dogs were.  He greeted us and pulled out a computer.  No English was spoken, we just waved our hands a lot.  He opened the screen and began scrolling through puppies.  We picked some numbers next to the photos.  We had no clue what we were doing.  He disappeared back through the mesh covered gate.  The dogs began barking. How did the neighbors not know this place existed?  We were not in the country, these were like 1/2 acre lots with large cement homes.  I took this opportunity to peek through the mesh.  Inside the courtyard were 25-30 adult dogs.  They didn't look unhealthy, maybe they needed a bath, but it wasn't awful.  It was clean in there too.  That counts for a lot in my book - the whole "cleanliness is next to godliness" thing.

The owner reappeared with laundry baskets full of puppies ranging from 1 week to 16 weeks old.  We picked them up and cuddled them.  We watched them to see how they interacted.  Truth be told, my  favorite was the male who walked all over everyone else, and pulled himself up the sides of the crate.  He was an ambitious climber, full of energy.  He had so much personality!  There was a cute one with  a patch of black on one eye.  In the end, we decided on a 6 week old little girl.  We missed the tiny puppy stage with Carbon.  He was 5 1/2 months old when we got him.  We decided a girl would be smaller, thus better for all the moving we do and she was cuddly and quiet - what we need for apartment living.

Her first day with us was rather traumatic I think.  We put her in our cat carrier, took a taxi to the MRT, then the MRT back into Kaohsiung.  I gathered her in my arms and carried her through the city.  The doc. warned me of every curb and bump.  He held my elbow at moments to be sure I didn't stumble.  We had dumplings for lunch then got the train back to Taipei.  Settled back in our apartment, we are a mom and a dad again.  We are looking forward to this next gig!  Welcome to our home little girl.
Posted by Inner Beauty at 9:16 AM

Email ThisBlogThis!Share to TwitterShare to FacebookShare to Pinterest
Labels: Moments with Matcha