A Hike into the Margalla Hills

The chilly morning air greeted us as we stepped out of the car at the beginning of trail no. 3. There were few cars in the parking lot as we headed up the trail into the Margalla Hills.
The Margalla Hills, the foothills of the Himalayas, are just North of Islamabad. There are two different legends behind the name of these hills. Mar means "snake" in Persian and galla means "heard" in Pashto thus giving the meaning of a place with a lot of snakes. Fortunately it is winter so all snakes would be in hibernation right now! The second legend is derived from Mar Galla meaning "hit, neck" or "to strangulate". It is believed these hills were used as a sanctuary for bandits and robbers who would strangle travelers to rob them.
The trail was steep and rocky giving us a good cardio workout. The first bit of wildlife we spotted were three Kaleej pheasants in the brush. The jet black male with red around his eyes stuck out against the brown earth whereas the two females were harder to spot with mainly brown feathers.
A short time later we began to hear scuffling and chattering in the brush. Soon the monkeys began running out of the bushes. The young would follow, some being as curious as I was, stopping to stare. Monkeys in the wild were exhilarating to me. As we climbed higher we no longer saw wildlife. Although the day was hazy, the views were beautiful looking to the South down at Islamabad and to the West at the hills stretching out in the distance. We passed several hikers and runners going down the path.
Halfway up the trail we came upon a camp of tents surrounded by barbed wire. Several armed men inside were lounging around. The sign said "Margalla Hills Rangers". These men were Rangers in the military sense. Their job is to monitor people crossing the hills into Islamabad.
We began getting glimpses of our destination, the Monal Restaurant. We came to a fork in the path, choosing the left. A faint sound of music floated down the hills from the restaurant. It sounded like a music box. A few paces later we came upon a small village. Cows were tethered under a stick shelter. A mud building stretched out. Rugs were hanging on a line and women and children were walking between rooms. A girl pointed to where the trail would lead us up to the restaurant. A few minutes later we emerged in the parking lot.
We entered the outdoor restaurant and reclined in the pillows on beautifully painted benches. In a few short minute we were warming our hands on steaming cups of milk tea. Chicken in a red sauce and wrapped in hot naan was delicious. We rested, filled our stomachs and enjoyed the view before being picked up by the motor pool. 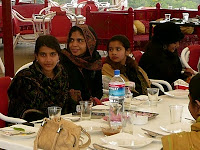 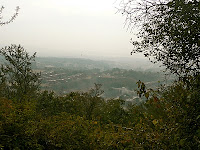 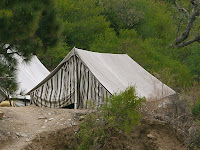 Email ThisBlogThis!Share to TwitterShare to FacebookShare to Pinterest
Labels: Pakistan