The Eyes That Haunt Me 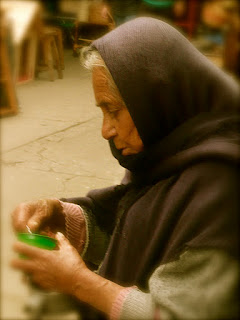 Here in Bogota I have encountered a few things that I haven't had to deal with before. They are things that I wrestle with in my soul all day long. It's a combination of living in a large city and living outside the USA.
Each day that I jog a pass a shriveled up old woman wrapped in a plain, rough blanket begging for money. Her hair is grey, her face is wrinkled. I love her eyes, she holds out her withered hand and when I drop money into it she smiles and her eyes sparkle. I long for that sparkle early in the morning. This morning I headed out for my run but I forgot my money. I don't give her much, about the equivalent of $0.30 each morning, but I know that money will buy her breakfast. It hit me as I approached her huddled form that I didn't have the money with me. She looked at me as I was getting near and smiled. I wanted to cry because as soon as I said “I'm sorry” I could see a well of sadness in her eyes. It has bothered me all day that I was so preoccupied with myself this morning that I forgot this little act of kindness.
About two weeks ago I was coming home from a friend's apartment. It was pouring rain so I was in a taxi. We pulled up to a red light and a form leaning against a building caught my eye. It was a man. He had no umbrella and no rain coat. I could see that he was leaning on crutches. He was huddled into the wall of a building trying to protect himself from the rain. I stared trying to figure out what was wrong with him. One arm appeared to be much longer than the other. It was hanging 12-18” longer than it should have. A car in front of us rolled down their window and called him over. As he turned toward the car I saw in horror that it wasn't his arm, but rather his leg that was the problem. The leg was gone below the knee. Long strips of raw flesh hung from his thigh. His knee was red exposed flesh and bone. As the taxi moved on my heart stopped. I have been haunted with the “What could I have done?” and “What should I have done?”. I can't imagine the pain he must have been in. What happened to him and who is helping him?
These are situations that I don't know the correct responses to. I can discuss and debate poverty with people all day long, but that doesn't satisfy the ache in my heart for these people.
Posted by Inner Beauty at 4:19 AM