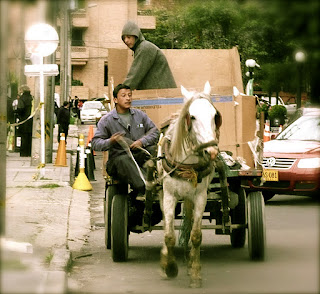 Often when walking home in the evening I pass a cart pulled by a horse and a couple working near it. It's not an uncommon sight here in Bogota. The rich drive cars, the middle class take taxis, the lower middle class ride the bus and the poor have a horse and cart for their work. The even poorer people have no horse for their cart so they pull it themselves and the desperately poor beg in the streets.
The class of people with horses and carts are the recyclers. This is their job, it is how they squeak out a living. Often their children work along with them. They live in shacks made of old metal and cardboard leaning against each other.
This particular couple works our area. I recognize them because our dog is terrified of their horse. Last night I was walking home from dinner and passed this couple. Because it was a nice evening and I was strolling I took the time to really look at what they were doing. They both had a large plastic garbage bag in front of them that they had ripped open and were sorting through. They were removing everything they could sell to the recycling facility or re-use themselves. It really hit me that they were sorting through my garbage. Along with many others in these apartments, I sort my recycling during the week then set out various bags next to my garbage shoot for the recyclers. I hope that I am helping them out because what is left that goes down my garbage shoot is not a pretty site.
I kept walking past. The lady smiled and nodded to me. I smiled back, but it felt so inadequate. Is there a possibility that her children will be able to break out of this cycle of poverty?
Posted by Inner Beauty at 8:42 PM