Ruth, From the Eyes of an Expat, the First Verse 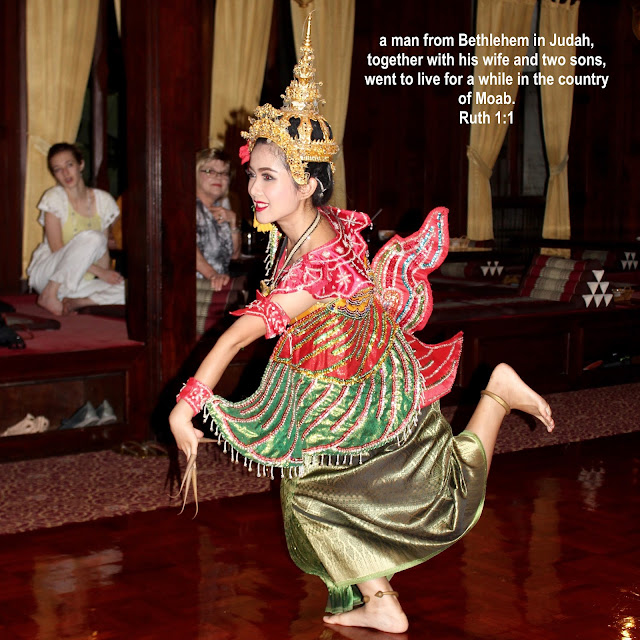 This week I began wandering my way through the book of Ruth with some friends from my building.  Ruth has been my favorite book for a long time, but I've never taken the time to dig in and really explore it.  I'm loving that I get to do that with this group of women.  I think there's so much that's going to be meaningful to us because of who we are, where we are and why we are here.  I hope I can share a bit of the perspective with you, here over the next few months.

In the days when the judges ruled,

Written 1,000 years before Christ was born, by the prophet Samuel, I have difficulty imaging what the world was like at that time.  I've gotten glimpses in my travel, of countries and people who seem frozen in time, so I can begin sketching a picture together in my mind.
Before Israel had kings, priests were in the position of keeping religious and civil law.  This worked great as long as the people were following God, but we see a cycle of Israel following God, straying from Him and worshiping idols, God brings judgement to the people, Israel cries to God, and God delivers them.  Over and over, we see this cycle, the people never seemed to learn.  During the times of judgement, God, in His compassion, would raise up a local judge to deliver the people and bring them relief from oppression.  (Judges 2:18)  This was a dark time for the nation of Israel.  When the nation is back and forth in following God, one young lady, from outside the nation, looks at God and says, I will follow you.

There was a famine in the land.

Understanding the desperate need to find food for my family, is something that I can't even grasp.  In the land of plenty, if I was short on an ingredient, all I had to do was run to Meijer and pick from the 20 choices in front of me.  The closest I have come was living in Moscow.  At times I would be absolutely baffled that the grocery store had no eggs, or potatoes or other staple items.  I never got the impression that the items weren't available, I feel it simply came from poor planning by the managers.  The country had lived for so long with limited and rationed supplies, that their mindset was one of doing without.  I understand re-planning meals for the week around what is available and I also understand not having access to the ingredients I'm used to.  But I don't understand the lack of food to the point that I would need to move my family to another area, simply to be able to eat.  What decisions would I make if I was holding my child in my arms and I knew there was nothing I could do about the skinny arms wrapped around my neck?
How desperate would you have to be?

Went to live for awhile

This was not a long term plan.  This was a contingency plan to survive for the next few years, then they would move back to Bethlehem in Judah, and life would continue on as normal.  This was not ideal.  This was survival.  Often when I'm in a country and a group of women are together, a little griping and complaining will begin.  We miss this or that, or sometimes, there will be one woman who just doesn't like it there.  And so we begin encouraging them in the only way we know, "You can survive anything for two years."  And so, I watch women around me cope, by checking the days off a calendar and having a hard nose attitude and demeanor of survival.  I wonder if this is the attitude Elimelech and Naomi had as they left Judah and traveled to the land of Moab.

in the country of Moab.

The Moabites are descendants of Lot.  (Gen. 19:30-38)   Lot had settled in the wicked town of Sodom.  God decided to destroy the city, but upon the pleas of Lot's uncle, Abraham, two angles knocked on his door and escorted Lot, his wife and their two daughters from the city as God rained down fire on it.  The mom looked back at Sodom, the city she had built her life in.  Lot put his arms around his two daughters and blocked their view with his cloak, from the city as they left so that they would not turn to pillars of salt as their mother had.  They went up to the mountains, where Lot found a cave and settled there.  Eventually, the girls realized they would not be leaving to get married, so they slept with their dad to preserve the family line.  The older daughter had a son and named him Moab.
Today, the country of Moab does not exist.  The area that used to be Moab, is now part of Jordan.  When I think of Jordan, I think of Queen Noor, the American woman who captured the heart of King Hussein of Jordan.  Queen Noor did much to promote the rights of women in Jordan.  The place of women in society was much the same during the time of Ruth that it was 50 years ago.  Women could not support themselves, they  had to rely on a husband or sons to take care of them.   Long before Queen Noor, a young woman left her hometown in Moab and became the grandmother of a long line of kings.
I also think of Petra.  Google a few images to get an idea of what the country looked like at that time. Petra was located just sound of the boarder of Moab in the desert.  Located on an important trade route, Petra became an oasis in the desert.  Roman columns carved into the surrounding hills sing a song of civilization amongst stark surroundings.
Relations between Israel and Moab were tense, often filled with war.  Even today, Jordan and Israel have a "cold peace" between them.  During the time of Ruth though, there was a period of peace between the two nations.  Moab was an easy choice to move to because the languages were similar.  That would be a big plus for me!  Languages are not my thing, I find it so difficult moving every few years to a new country with a new language.  In a few short years, I only bother to learn a few essential phrases.  It makes my brain hurt just thinking about it!
The biggest difficulty with moving to Moab was not a language difference, or distance or culture.  Moab worshiped idols and God detests this.  Chemosh was the chief deity.  The people of Moab sacrificed humans to this god.  (2 Kings 3:27)  But he was not their only god.  They had temples and sacrificed to Baalim, or the sun god, as well.  (Numbers 25)  Taiwan is my first experience of living in a country that worships idols.  Churches in Colombia and Russia were filled with icons, but the foundation of their beliefs was Jesus Christ.  Here in Taipei, neighborhoods have temples.  Some are ornate and some are very plain, even tucked away between a few shops.  I know when I'm approaching one because the smell of incense grows stronger as I come closer.  Idols are sitting in rows in the dimly lit room.  Typically there is one large idol, surrounded by many small, doll-like ones.  A table sits at the entry filled with food people have brought to sacrifice to the idols.  Sometimes music is playing.  Often pieces are in a minor key feeling discordant and uncomfortable.  The instruments are unfamiliar, the sounds they produce pierce the air like a scream in the night.  I go in because I want to understand.  I've been taught to pray, while in the temples, for those who are around me, that they might find the one true light.  God does not want his people to become defiled by idols and sacrifices to false gods.  He wants them to remain pure.  This is the world that Ruth grew up in.

Have you experienced extreme hunger, even fasted for a few days to understand the pain?
If you couldn't provide food for your family, what would you be willing to do?

Have you ever made a decision that you thought would only last for a little while, but then you found yourself trapped in a life you didn't want because of that decision?

Take some time to really think about the world that Ruth came from.  It is so very different from Western culture.
Have you visited a country that worships idols?
How did this make you feel?