Ruth, From the Eyes of an Expat, Vrs.7 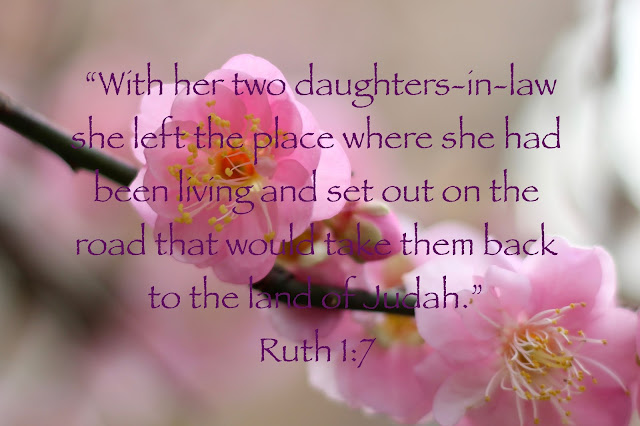 Returning home, after living in a different country, is a journey filled with many emotions.  It would be easy to read this passage and assume that Naomi was excited and happy to return home.  After all these years, finally, she was moving back to the land that held her childhood memories.

Naomi is no longer the young woman who left Judah.  Time has etched it's fine lines in her face and soul.  She left full of hope.  Hope for food and sustenance for her children.  Hope that they would only be in Moab for a short time.  Hope that rain would quickly come to Judah and the famine would end.  As the days passed, her hope faded.  She was a strong woman and built a life for herself and her children, even after her husband died, she held firm.  Then her two boys died and her hope finally began to died with them.  Now, going back to Judah, she no longer has hope, in fact, she has nothing.
Naomi has changed.  She's buried three men.  She's lived in a different culture.  She's held onto her faith in a land devoted to idols.  She's experienced different holidays and foods and language and culture.  And her heart has come to love these two girls who come from this country that God has commanded Israel to separate from.

I am not the person I was.

Naomi knew she wasn't the same person who left 10 years ago.  But had the family and friends who remained behind changed as well?  Had they grown in different ways that would create a great gulf between them?  Were they dead or alive?  Did they remember her?  These are the same questions that plague every ex-pat upon returning home.  Basically, it boils down to, "Will I be accepted, not only for who I was, but for who I am today?"

"Call me Mara, because the Almighty has made my life very bitter.  I went away full, but the LORD has brought me back empty."  Ruth 1:20-21

Naomi had 10 days of walking to contemplate these things as she returned to Bethlehem.  I usually only have a plane ride.  We see that, in this time, Naomi went from feeling bitter about her circumstances to seeing her entire identity wrapped in bitterness.  We all have a choice about how we are going to return home.  It's hard--we've changed.  We've experienced things that others will never understand.  But how we return is our choice.