Ruth - From the Eyes of an Expat - Chapter 3 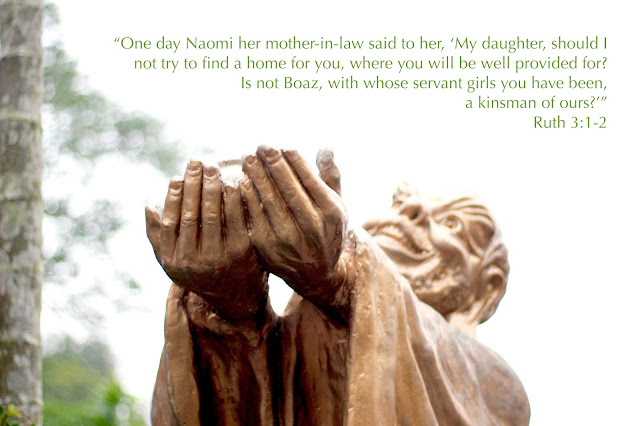 I used to think of the book of Ruth as a love story, and it is, but not quite yet.  Chapter 3 begins to touch on what will be love, but at this point, it's a story of trust, of obedience,  and of respect.

I used to have a hard time with the idea of Ruth marrying this man that she didn't know.  That was when I was young and newly in love myself.  The concept of a marriage that worked, and worked well, between two people who didn't know each other was something that I just couldn't grasp.

While my husband and I were dating, I got to know one of his friends pretty well.  Our friend was Indian.  We sometimes ate dinner together in the cafeteria.  We went to church together and grew to a place where we were comfortable talking.  I remember asking him if there were any girls he was interested in.  He said no, his parents had a girl promised for him in India.  He never went on a date - ever.  Several years after Chad and I got married we bumped into our friend and he told us he had just gotten married.  He was so happy.  In the following years, we got together occasionally and watched as their family grew.  They were a couple who were happy, serving God together, growing a family and in love--and they only met once, briefly before they walked down the aisle and said I do.

Watching that relationship grow was the beginning of my understanding that love could develop in a different way than my western mind understood.  But our Indian friends were young and of the same age and culture.  Ruth and Boaz had more to overcome than simply not knowing one another.

Another hurdle in my mind was the age difference between Ruth and Boaz.  There are enough mentions in chapters one and two that Boaz is old and Ruth is young to know it was significant.  I have no idea the difference in age, but the picture that comes to my mind is one that is tainted by Hollywood and money.

Too often is the picture one of an old man who is filthy rich with a piece of eye candy on his arm.  You know she's just in it for the money and he's just in it for what others see.  Rarely does it work out.  These stories are just one disaster after another.

When I worked at the embassy in Moscow, I began to get to know several of the older men who worked as contractors in the facilities' department.  Because of the high security needed in Russia, the embassy could not hire locals to do tasks such as cleaning the office space or fixing broken things.  So contractors from America with high level clearances, lived in Moscow, just as we did, and worked for the US embassy taking care of the necessary every day tasks that needed to be done.  Often these were men and women nearing retirement, or who had retired from one job already and were doing this as a way to see the world and save up some extra income.

It is typical when working for the embassy to hire a maid.  In Moscow, the majority of the maids were from the Philippines.  They worked long days and sent the majority of the money they made back to the the Philippines to support their greater family.  I met several men who had recently married their maid.  The first couple I met, startled me.  I had a bit of a hard time understanding the relationship.  I began to watch these couples, how they interacted.  I wanted to know if they really loved each other or what the attraction was.    Slowly, I began to see and understand a very deep love between the men and women.  For the men, they now had someone to take care of and to share meals and conversation with.  For the women, they had suddenly had someone to provide for them and they had someone to take care of.  These couples tended to be very caring and compassionate for one another.  Their love was built out of meeting needs for the other person.

This second picture, the couples in  Moscow, give me a glimpse into the relationship that Ruth and Boaz may have had.  Both people had built a reputation to be respected.  They had common ground of a firm belief in the one true God.  Ruth needed a redeemer, someone to care for her and carry on her dead husband's name.  Boaz gained companionship and someone to care for.  Their relationship started out based on respect and duty, but by the end of chapter three, I think we begin to see some love shining through.
Posted by Inner Beauty at 6:53 PM